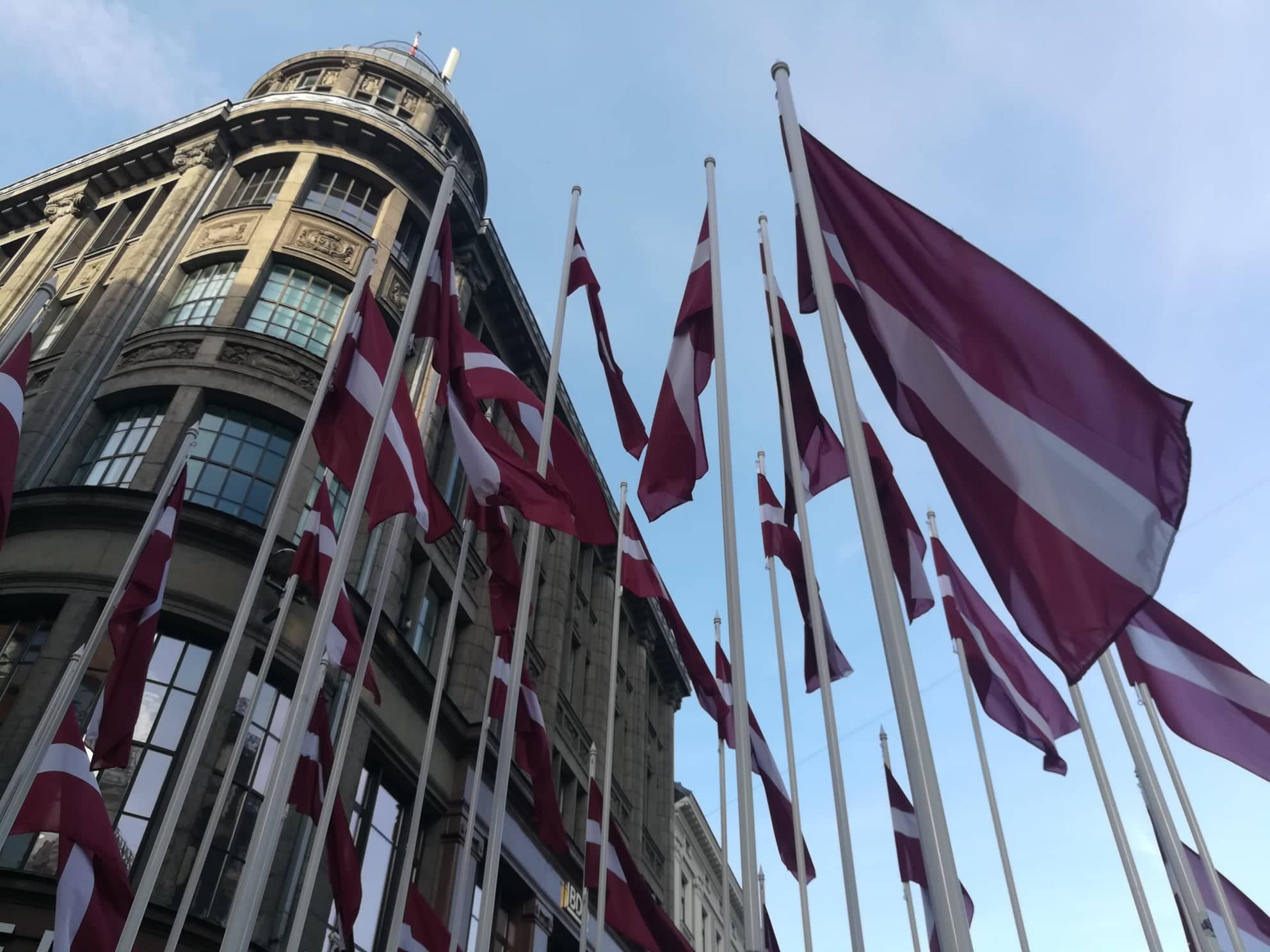 However, during this time up to the big anniversary, Riga is also the capital of tears – tears of emotions, pride and the presence of miracles. This small country Latvia, always desired and conquered by others has survived, is stronger than ever before and has reached its first big milestone – 100 years since its proclamation. As the celebration of Latvia’s centenary is taking place for 5 years, starting from 2017, there have already been big events that have triggered all the spectrum of human emotions. Excitement tears, goosebumps, and shivers have been just small byproducts compared to those big spiritual experiences where feeling united with everyone else as one body and the connection with the universe embraced the heart deeply. Most of those emotionally touching events have taken place in Riga. They include the European Choir Games, all-Latvian Song Festival, 16th Dance Festival, and many others. Now is the time for culmination, and I can tell you that for this moment, Riga has prepared some unforgettable surprises to celebrate Latvia’s birthday. Read on and you will be amazed at what Riga has in store. 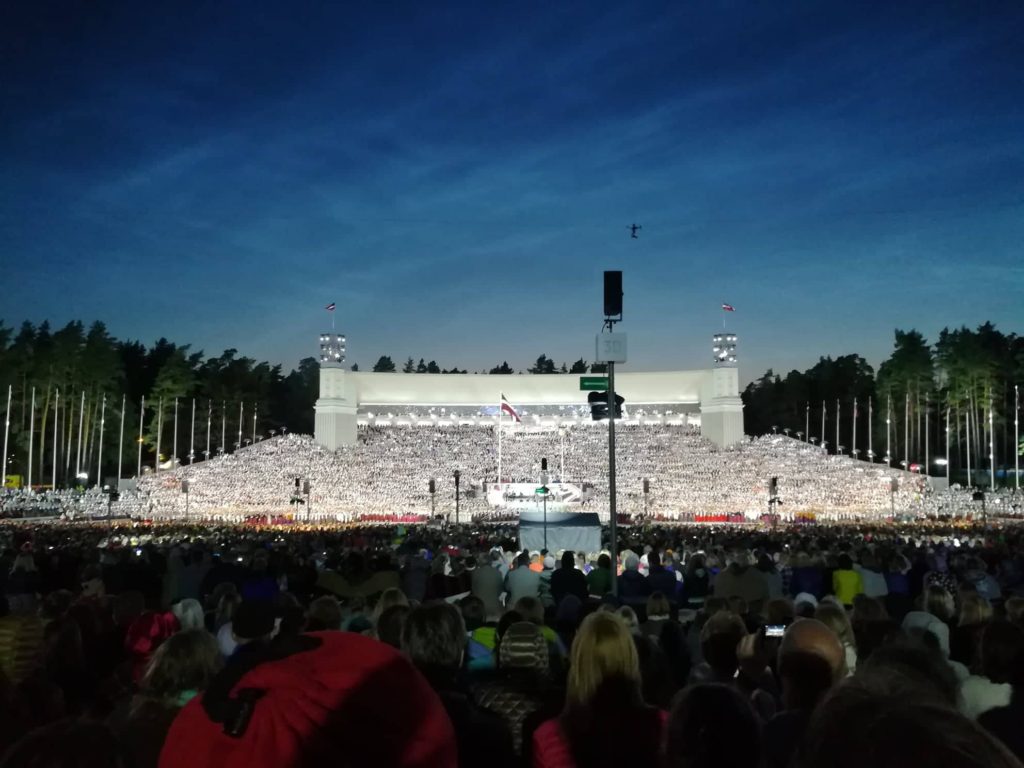 Staro (Shine) Riga is not a coincidental title.  This lighting and multimedia event is taking place in one of the darkest months in Latvia – days have become so short, but the Christmas lights are not completely turned on yet. The festival started in 2008, organized by the municipality of Riga in collaboration with artists as an extra element to the celebration of Latvia’s birthday.

The venues of the festivals are the building facades, bridges, squares, monuments and other city places in Riga where light art can be displayed. Both international and local artists will show their creativity reflecting on the theme of the year – “Up rose the Castle of Light” This is a name of a popular Latvian song and also a folkloric metaphor. According to the legend, the Castle of light, the wisdom of the nation sank when Latvian people were oppressed during the long period of invasions. However, it will rise again after the intellectual darkness of war and occupation have been overcome in Latvia. Besides, the metaphor of Castle of light as the main source of inspiration can also be seen in one of the most significant 21st-century building projects in Latvia – the National Library of Latvia. 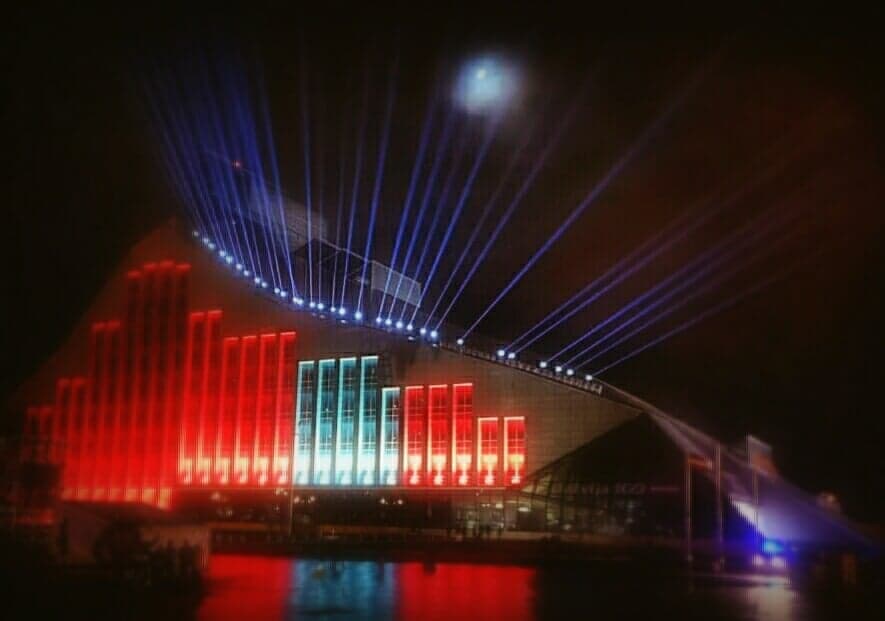 I am not a big fan of historical exhibitions, but when I attended Latvia’s Century at the National History Museum of Latvia, I felt as if I was participating in a documental movie and experiencing all the historical events on my own skin.

Deep and touching it was.

The exhibition is full of interactions. There are artifacts, historical people and me who can do something for Latvia even if its a just a little note with a suggestion. The feeling of being a part in building something big – the country is amazing.

My recommendation is to free the whole day for this exhibition and dive into the 10 sections of intense experiences of wars, songs, collective farm madness, deportations, soviet interiors, singing revolution and over that – strong love for own roots, culture, and heritage. 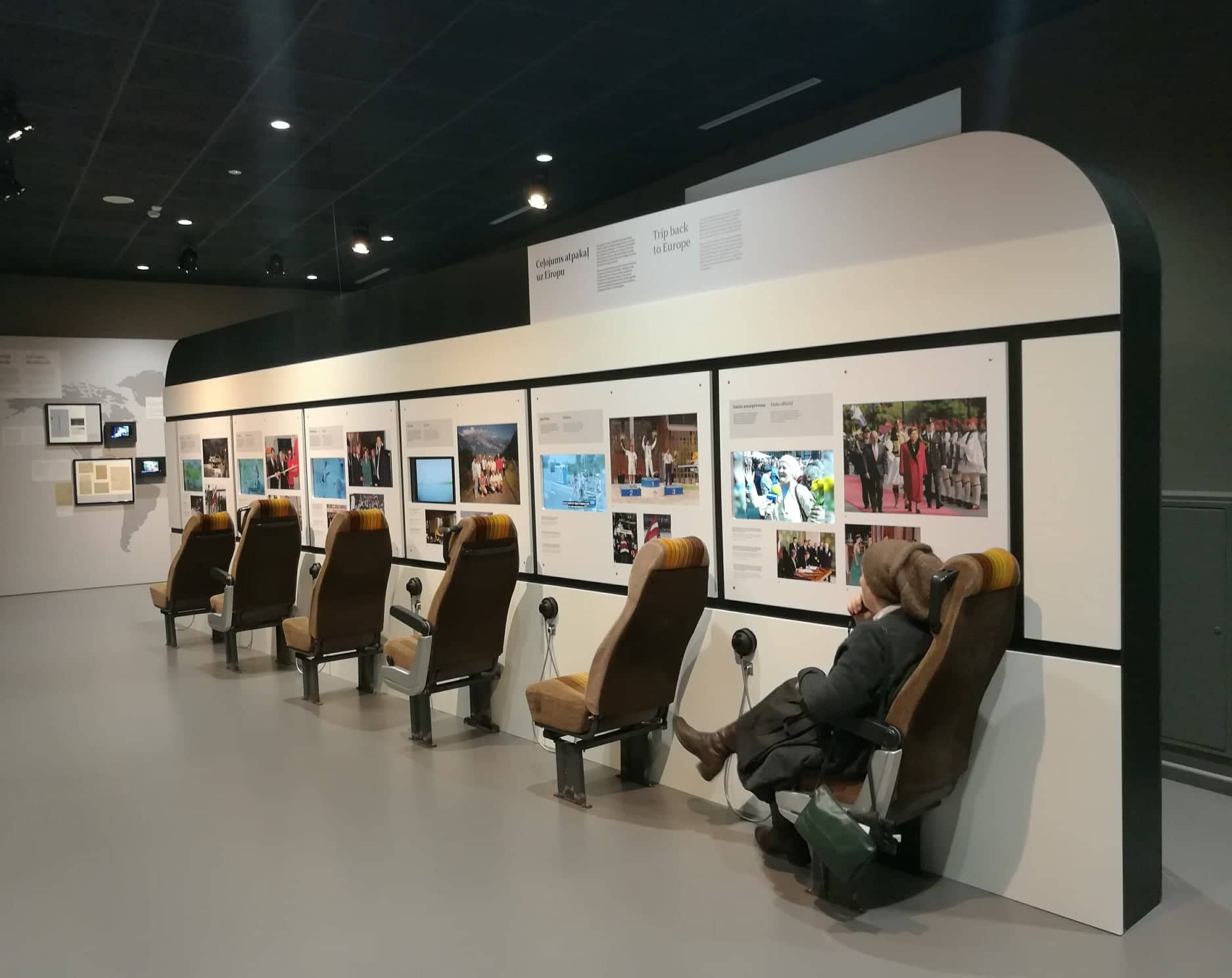 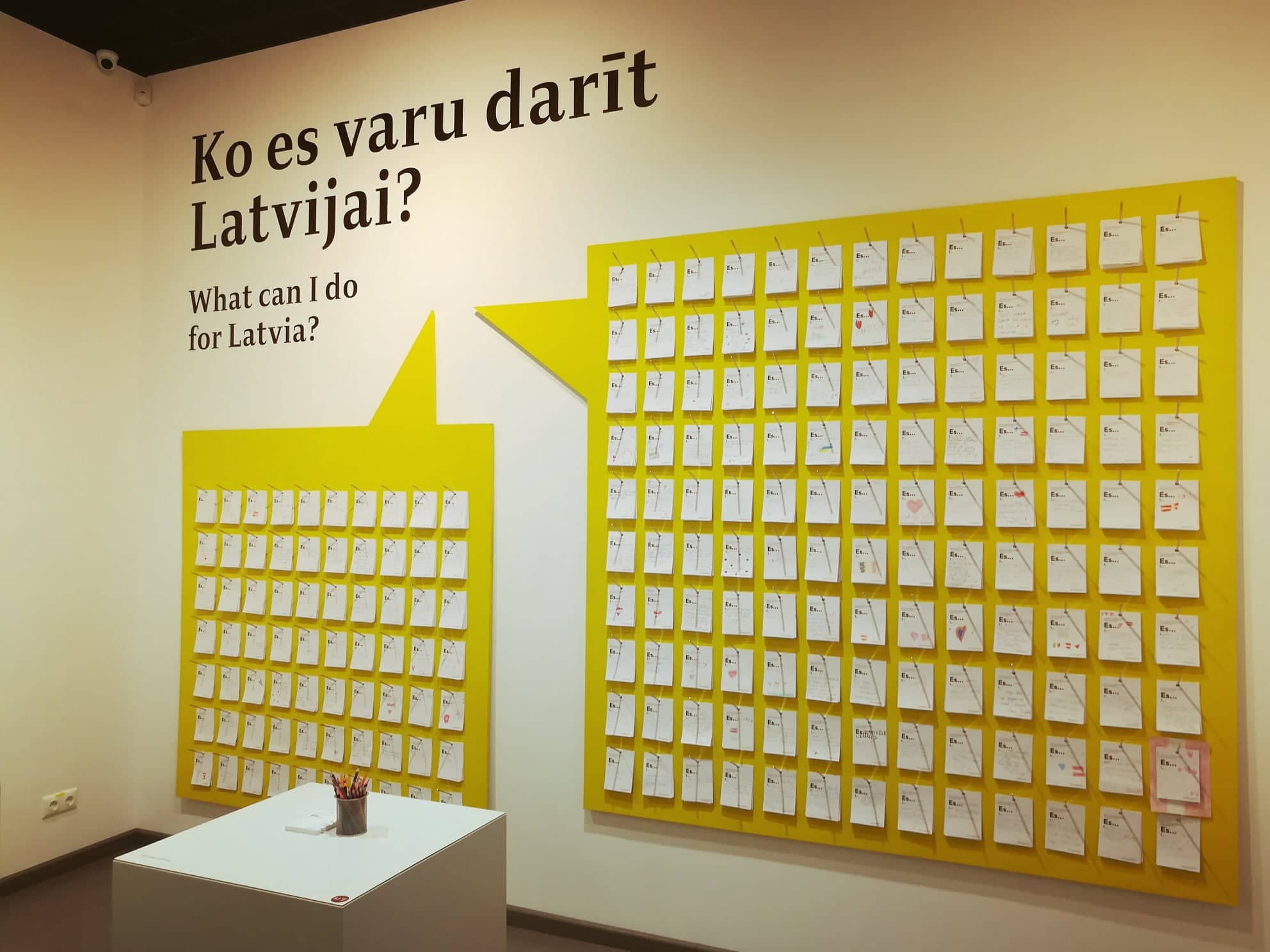 The torchlight procession through Riga on 18th of November is a tradition that started in 2003 in honor of the founders of the Republic of Latvia and the soldiers who gave their lives for the freedom of their country. From that time, each year it gathers more and more participants.  Last year, on the 18th of November 2017, there were around 18 000 people participating in the procession making it the most extensive event of its kind in Northern Europe. It is expected that this year more people will join and who knows, maybe its gonna become the biggest torchlight procession in Europe! I definitely recommend that you join.

The gathering will start at 16:00hrs at the square near the monument of Karlis Ulmanis where everybody can get their torch free of charge. At 17:00hrs,  the procession will start and will end an hour later by the National Theatre where 100 years ago the Republic of Latvia was proclaimed.

Musical Event “18.11” by the Freedom Monument

If you even have been in Riga, you have definitely noticed the beautiful cooper woman lifting 3 stars on the high travertine column – the symbol of the freedom, independence, and sovereignty of Latvia. It was built in 1935 to honor soldiers killed during the Latvian War of Independence (1918–1920). This monument has a very special place in the hearts of Latvians as it was one of the few visible independence symbols during the occupation of the Soviet Union that was not demolished.  The Soviet authorities knew that the destruction of the monument would cause deep indignation and tension in society. As the monument honors the forces that were one of the reasons Latvia could proclaim its independence in 1918, it is going to have its own event during the celebration of Latvia’s birthday. The musical event will be a multimedia story about freedom, in which the main storyteller will be the Freedom Monument. The focus will be on the main message that sculptor Karlis Zāle wanted to express with its creation – the fundamental values and ideals of the state to freedom and excellence. The event will start at 18:45 and if you stay until the end, your patience will be rewarded by a speech of the Latvian President Raimonds Vējonis at the Freedom Monument at 20:00hrs. 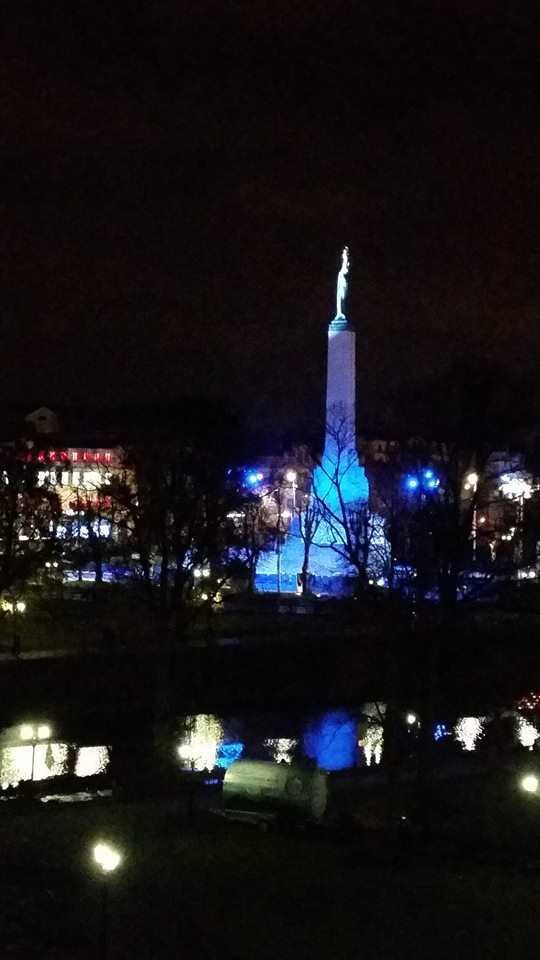 The Culmination – light performance “the light of the sun”

The term culmination can have a very different meaning from one person to the other.  Sometimes, the way up to culmination can be more pleasurable than the very climax.  In the case of Latvia’s birthday celebration in Riga, the culmination will be definitely worth experiencing together with thousands of other people. Especially because the next time a similar chance will be after 100 years, but even then, it will not be as special as the first centenary…

The culmination will take place in 11. Novembra Krastmala, the Daugava Water Basin between Vanšu Bridge and Akmens Bridge.  It will also be possible to see on the screens at the Freedom Square.

The light performance will tell Lativa’s story since its creation the present day. It will end with unseen, beautiful fireworks. This is why you might have seen several platforms and other technical equipment placed in the Daugava area. Just a little economical note: this show is going to cost 235 000 euros. Many people feel that the money should be spent in other ways, but I think that once such an amount is spent, the only thing we can do is to go and see. At least we’ll keep the warm-after feeling and be compelled to do good to others.  The money spent will definitely be worth it. 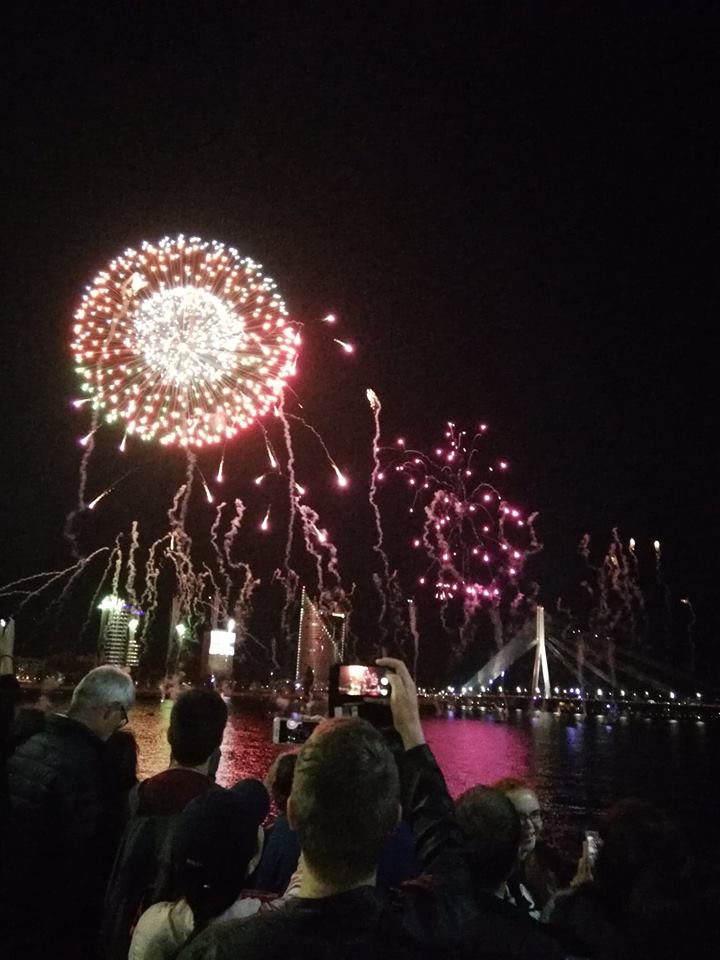 The Ribbons – a resemblance of the Latvian flag

If you have passed the streets of Riga lately, you probably noticed lots of people coming towards you with small ribbons on their warm autumn jackets resembling Latvia’s national flag. This has been a gesture of showing their love and patriotism towards Latvia. If you want to join this initiative, you can get these ribbons free of charge in The Visitors’ Reception Centre of the Rigas City Council at Kungu iela 7/9, Brīvības iela 49/53, Daugavpils iela 31. There is also another initiative organized by Rigas City Council – public transport on the day of the 18th November will be free of charge!

As you can see, everything is done for you! You are a welcomed guest to Latvia’s birthday party in Riga. Come and create memories that you will cherish for the rest of your life!

Scroll back to top